My husband snores so loud our neighbors can hear him. I’ve heard dentists can help with that – can you? 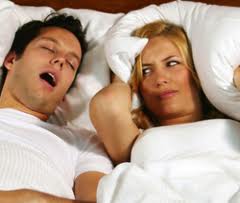 Waking up the neighbors is definitely loud enough to be of concern.

Snoring is annoying, but it can also be dangerous. Snoring is one of the tell-tale signs of sleep apnea – the condition that causes one to stop breathing for 10 – 30 seconds up to 400 times during the course of the night. This not only causes morning grumpiness, but also has been linked to severe health problems including heart disease, diabetes, stroke, high blood pressure, heart failure, and even how well (or not so well) your brain works. Overall, people suffering from untreated sleep apnea are 7 times more at risk of getting in a car wreck and 6 times more at risk of death from all causes, irrespective of any other illnesses.

Fortunately, public awareness of sleep apnea is growing and people are choosing not to live with its dangerous consequences. Dr. Rosen has been trained by the American Academy of Dental Sleep Medicine in the placement of dental sleep appliances that can help relieve the condition and provide more restful, healthy sleep.

Dr. Rosen feels so strongly that knowledge and action can improve and even save lives that he is offering a no-cost individual 30 minute consultation on the subject of sleep breathing disorders, whether it’s you or your partner’s really loud snoring, or sleep apnea. Schedule a visit for you or someone you love today by calling 831-424-0881.

Summertime should be a time to catch up on your rest and with minimal cost and intervention you could potentially energize and extend your life, increase your productivity at work, and best of all, earn the undying gratitude of your sleeping partner. 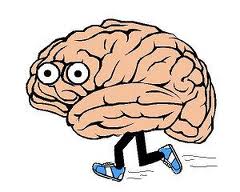 It’s kind of a good news, bad news thing. We know running is good for us, but dang its hard to get out and do it.  My 3 year old daughter runs everywhere she goes and it does make me remember that running can indeed be fun. In our office we have some very active runners with Dr. Andresen, his assistant Dagmar and hygienist Kristin liking to run so much they pay to partake in races!

We all know it reduces stress, builds cardiovascular health, and even helps beat depression, so if we could just get our brain to convince us that we like it as much as we like potato chips, we’d be out there in one healthy heartbeat.

Turns out that if the brain is really looking out for itself, it’d be shouting at the top of its lungs for you to lace up those sneakers.

Last year, researchers at the Beckman Institute for Advanced Science and Technology at the University of Illinois offered mice four different environments:

When measuring the mice’s brain tissue health and performance on cognitive tests after living in these environments for several months they found that, “[o]nly one thing mattered and that’s whether they had a running wheel.” No matter how enriched their world was, the mice did not get ‘smarter’ unless they went running.

Other researchers have maintained that the reason we were able to evolve larger brains in the first place was because of our ability to run – not sprint, mind you. Just jog. And another study found that 65-year-olds were able to walk their way to a 63-year-old brain.

So, present this information to your brain and see what it says. No need for Dagmar-style heroics – a good old fashioned Sunday stroll could keep your brain just as youthful and spry as that 3-year-old alighting down the street. Okay, maybe not that spry, but you get the picture.

For more information:
PBS – Spark
Alan Alda talks to scientist Dan Lieberman about why the human ability to run could be an important prerequisite for the evolution of our bigger brains — and the emergence of our human spark.

New York Times
How Exercise Could Lead to a Better Brain

I read in your latest newsletter that Xylitol candies might prevent tooth decay. Should I be giving them to my kids as a regular treat?

There is evidence that shows that Xylitol helps prevent cavities, but we are still hesitant about recommending it for regular consumption. A  study in the British Dental Journal advised caution with Xylitol, specifically products containing acidic preservatives or flavorings such as orange, lemon or lime. The researchers found that while Xylitol products can help slow decay, they may erode your enamel if they contain acidic flavoring.

The bottom line is, as usual, use common sense. For those of you prone to cavities who have a sweet tooth you just can’t shake – by all means go for the Xylitol candies, preferably the chocolate kind. But there is no need to begin a Xylitol candy habit if you don’t have to.

A sweet tooth is a sweet tooth and as long as you can avoid creating one in your children, the better, not just for their teeth but for their health in general.

If cavities are caused by bacteria, why can’t I eat sugar? 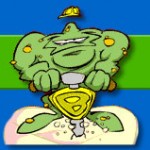 Like most of us, Mutans Streptococci, our bacterial villian, loves sweet treats. With Easter just around the corner he is firing up his jackhammer and getting ready for a feast!

Sugar is his food of choice because the more he eats of it, the more acid he produces and the more powerful he becomes. Acid is his secret weapon – it enables him to dissolve the protective enamel of our teeth.

If our teeth’s trusty sidekicks, Toothbrush, Dental Floss, and Pik fail to show up to clean and wash away the acid, Mutans is able to penetrate the tooth further, creating a tiny pit where he can reside more comfortably. As time goes by, he digs the pit deeper and deeper until he’s got a nice cozy home called a cavity. The only way to  evict  him is to drill into his hole, scoop him out, and fill the now-empty space with expensive dental material. That costs a pretty penny.

The moral of the story is: Refuse to feed the Mutans! And make sure your teeth’s trusty sidekicks make regular appearances. In other words,

For a great list of dos and don’ts:
The Top 7 Best and Worst Foods for Teeth

Stay tuned next time for how to fight cavities while eating Easter candy!

I’ve heard that cavities are contagious? Is that true? 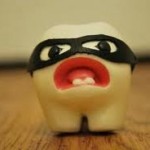 What causes cavities? Sugar right? Well, sort of. Ultimately the cause of cavities is bacteria that feed on leftover morsels of food in your mouth. Imagine them as tiny little creatures that love to eat and the more food they find in their scavenging, the more they burp and expel (in a manner of speaking). The ‘byproduct’ they release just happens to be acid and their ‘toilet’ happens to be your mouth. Gross.

Acid, as you would expect, is not so good for the teeth or for your gums, scouring away enamel and gum tissue. Everyone knows that proper brushing, flossing, and use of a Pik can help flush out the acid after a meal. What is less well known is that once active cavities or gum disease is present, it means that the bacteria have taken up residency and are having parties on a regular basis in your mouth.

The consequence is an expansion of the party to other people’s mouths with whom  you share food, drinks, or kisses. 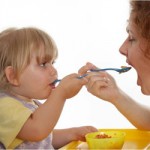 Just as a cold can spread in this way, cavity-causing bacteria can too. Primarily this is a problem for children who are particularly susceptible to this kind of bacteria and share food and drinks with their parents or caregivers. They also are less vigilant with the brushing. Since cavities in children are so difficult to treat (simply due to their lack of ability to sit still while being drilled on), it is important for parents to be aware not only of the health of their children’s teeth, but of their own as well. Treating their active cavities and bleeding gums quickly and completely will not only save their own teeth, but will help protect their children’s as well.